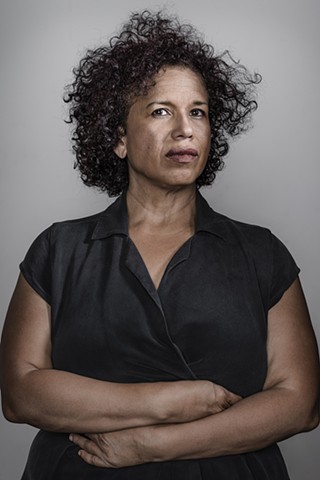 San Antonio native Barbara Felix, is a multidisciplinary figurative artist of Black and Hispanic descent. She received a BFA in Graphic Communication from Texas State University in 1991. Felix's TSU coursework fired her love of the human figure and inspired her work as an artist. Her artistic process was nurtured at the Honolulu Academy of Art late 1990s. She continued her art study after returning to Texas at the Southwest School of Art, receiving a Best in Show award in 2007 at the juried All School Exhibition. She later earned a "Certificate in Drawing, Painting and Printmaking" from SSA in 2013. Felix also received a 1st place award for work from "The Color of Women" series, in 2019 at the [RE]Imagine exhibition in Round Rock, TX.

Felix's solo exhibitions include Glorious Way She Moves at the Carver Cultural Center in 2021; Bailando con Mi Misma at Debra Benditz Studio Gallery in San Antonio in 2016, and Every Woman Venus Every Mother the Madonna in 1998 at Leeward Community College in Honolulu, HI. She has participated in group exhibitions at The McNay Museum; Blue Star Contemporary's Red Dot exhibition; City of San Antonio Plaza de Armas Gallery, and other gallery and many other gallery and institutional spaces throughout San Antonio and the state of Texas.

Felix has also produced experimental stop motion animation and performance videos both as solo and collaborative projects, which have been featured at Luminaria San Antonio Arts Festival; Blue Star Contemporary and the Darmstädter Sezession - Projection/Projektion video exhibition in San Antonio and Germany; and other film festivals, symposiums, workshops and pop-up events throughout San Antonio and across the United States.

Felix is an executive board member of Contemporary Art Month; Gentileschi Aegis Gallery Association (GAGA); the San Antonio Ethnic Arts Society (SAEAS); the National Association of Latino Arts and Cultures (NALAC), and the National Council of Negro Women. She has curated art and film for Black History Month 2022 at Slab Cinema Arthouse, and three exhibitions for GAGA at the Santikos Bijou Theater Gallery from 2016 - 2019. Felix will retire from full time in-house corporate graphic designer in early March 2022 to pursue her artistic passions full time. Her goal is to combine traditional and digital media with her love of dance and the figure, to explore racial identity, relationships, gender, and social justice issues, through both solo work and collaborative opportunities.