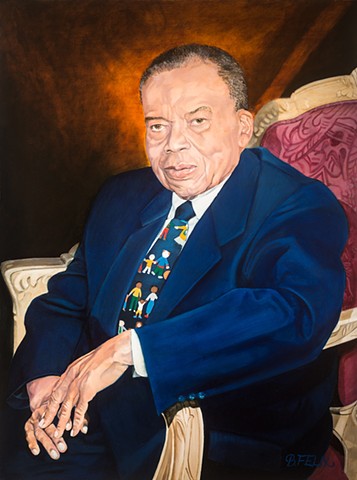 Portrait of my father, Dr. Robert L. M. Hilliard, OBGYN, commissioned by the University Health System of San Antonio for the opening of a new clinic on San Antonio's under served Eastside community. It was my honor to paint this portrait of him. It is from a formal photograph for a calendar by San Antonio's energy company, CPS.

My father passed away in 2014, but during his life he had an important impact on the progress of the Africa American community in San Antonio, particularly, the medical community, where he broke barriers by being the first African American to practice surgery in the degregated South, and the first to practice medicine in every hospital in San Antonio. But he was also very active in civic activities including serving on the City Council and holding other public offices.

He was dedicated to the well being of his patients and often saw them well after hours whenever his surgery schedule interfered with his regular office hours. He delivered over 14,000 babies in his career, delivering babies until he reached the age of 82. He sometimes brought three generations of several families into our city.

In college he roomed with Ambassador/Reverend Andrew Young, who kept a promise to deliver my father's eulogy during his funeral. As an only child, his mother, my grandmother, who was an educator, kept him focused on learning and having goals and doing everything possible to achieve them. He is survived by 8 children, 5 grandchildren and 5 great grandchildren.